Bread and butter pudding is as British as, well, rain on a Summer’s day. Definitely not a pudding for those on low-calorie/carb/dairy-free diets but perfect if you are on a low-budgets. It is comfort food at its very best and goodness knows we all need a bit of comforting at the moment.

Using bread in puddings can be traced back to medieval times, it was purely practical, soaking-up sweet and savoury liquids like a sponge. The dish used to be associated with invalid or thrifty cookery canons. This is due to it being easy to digest and a clover way of using-up leftover stale bread. The earliest bread and butter puddings were called whitepot and made with butter or bone marrow.

One of the first cookery books to feature a recipe for bread and butter pudding was Eliza Smith’s The Compleat Housewife of 1728. Below is another recipe by Hannah Glasse (1708-1770) which appeared in her 1747 edition of The Art of Cookery, Made Plain and Easy:

A Bread Pudding: Cut off all the crust of a Penny white loaf and slice it thin into a quart of new milk, set it over a chafing dish of coals, till the bread has soaked up all the milk, then put in a piece of sweet butter, stir it round, let it stand till cold, or you may boil your milk, and pour over your bread, and cover it up close, does full as well; then take the Yolks of six eggs, the whites of three, and beat them up, with a little rosewater, and nutmeg, a little salt, and sugar, and if you choose it, mix all well together, and boil it half an hour. (p. 109)

In my copy of an 1861 edition of A Plain Cookery Book For The Working Classes by Anglo-Italian cook, Charles Elmé Francatelli (1805–10 August 1876), there are two ‘bread pudding’ recipes:

No.42. A Bread Pudding For A Family: Ingredients, a two-pound loaf, two quarts of milk, two ounces of butter, four ounces of sugar, four ounces of plums or currants, three eggs, a piece of lemon-peel chopped, and a spoonful of salt. Divide the loaf into four equal-sized pieces, and soak them in boiling-water for twenty minutes, then squeeze out the water, and put the bread into a saucepan with the milk, butter, sugar, lemon-peel, and salt, and stir all together on the fire till it boils; next add the beaten eggs and the currants; pour the pudding into a proper sized greased baking-dish, and bake it for an hour and a-quarter. (pp.29-30)

No. 43. A Batter and  Fruit Pudding: Ingredients, two quarts of milk, one pound of flour, four eggs, eight ounces of sugar, one quart of fruit (either plums, gooseberries, currants, etc), one ounce of butter, a good pinch of salt. First, mix the flour, eggs, sugar, salt, and a pint of the milk, by working all together in a basin or pan, with a spoon, and when quite smooth, add the remainder of the milk; work the batter thoroughly, and pour it into a large pie-dish, greased with the butter; add the fruit, and bake the pudding for an hour and a quarter. (p.30)

In another cookery book from my collection, Mrs Beeton’s Cookery published in 1948 during the ration book era, I discovered another two recipes. One version suggests baking the pudding, another boiling it.

Bread And Butter Pudding, Baked: Cut off the crust of 5 or 6 thin slices of bread and butter and divide each slice of bread into 4 squares, arrange them in layers in a well greased piedish, and sprinkle each layer with sultanas or whatever is being used. Beat 2 eggs, add 1 dessertspoonful of sugar, stir until dissolved, then mix in 1 pint of milk and pour gently over the bread, which should only half fill the dish. Let it stand at least 1 hour for the bread to soak, then bake in a moderately cool oven for nearly 1 hour. (p.163)

Bread Pudding, Baked Or Boiled. Break 8oz of stale bread into small pieces, cover them with cold water, soak for about 1/2 an hour, then strain and squeeze dry. Beat out all the lumps with a fork, and stir in 2oz of sugar, 2 oz of finely-chopped suet, 4 oz of raisins or currants, clean and picked, a good pinch of nutmeg, and mix well. Add an egg, previously beaten, and as much milk as is necessary to make the mixture moist enough to drop readily from the spoon. Pour into a greased piedish and bake gently for about 1 hour. When done, turn out on to a hot dish, and dredge well with sugar. If preferred boiled, the mixture should be put into a greased basin and steamed or boiled for about 2 hours. Serve with a sweet sauce if like. (p.163)

Below is my version of bread and butter pudding. I would class it as a luxury version, on account that I have included some slightly more pricey ingredients, i.e. brioche and pecans. However, using ordinary bread and swapping pecans for 110g of sultanas will still produce a delicious dessert. Remember bread and butter pudding is also delicious when eaten cold, in slices. Adapt the recipe according to your budget at the time, either save or splurge:) 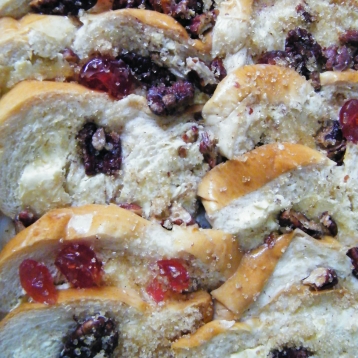 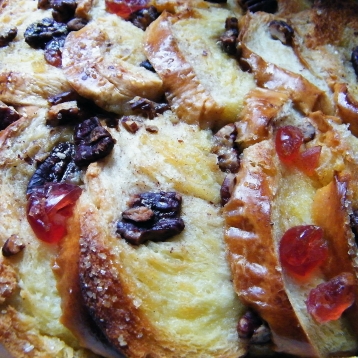