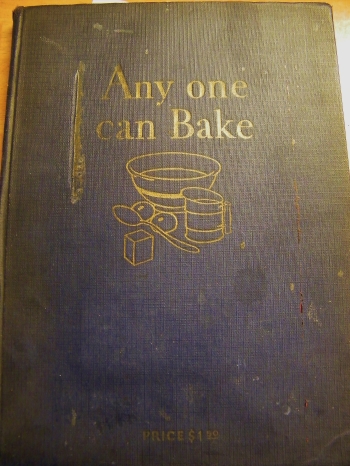 I was absolutely thrilled to receive a copy of Any One Can Bake, published by Royal Baking Powder Co. in 1929, from my friend, broadcaster Shan Robins. Shan had been clearing-out some papers from her family home and came across this book which she thought I would like. I don’t just like it, I love it!

I own a very large collection of 20th century cookbooks but the decade I have least coverage for is the 1920s. I particularly like collecting branded cookbooks of which this is a rather fine example. They are often a mix of advertorial, illustrations and advice. In other words, a rather nice item to own.

Although Any One Can Bake is an American publication, this edition was obviously sold in Britain. On the front page a sticker reading, ‘Royal Baking Powder – British Made’ has been placed over details of the American manufacturers of Royal Baking Powder.

Royal Baking Powder is most definitely an American brand. Created, in 1863, by two druggists, Thomas Biddle and Joseph Christoffel Hoagland (1841-1899). The pair came-up with the idea of pre-mixing baking soda and cream of tartar to save the home-baker having to do it for themselves.

The year of publication for Any One Can Bake, 1929, is a significant milestone in the company’s history and perhaps the reason for this celebratory edition. This was the year that Royal Baking Powder Co., merged, along with four other companies, to form Standard Brands. Below are a few landmark dates in Royal Baking Powder’s company history (source: Harvard Business School, Baker Library, Historical Collections)

Royal Baking Powder can still be purchased in the US. I haven’t seen it in the UK but if I am wrong then do leave me a comment below and let me know where I can obtain it. In times like these when we are obsessed with the ingredients in our food, I am happy to confirm that Royal Baking Powder is gluten-free, suitable for those with nut allergies and is also Kosher. Ingredients are now made-up of cornstarch, sodium bicarbonate, sodium aluminium sulphate and monocalcium phosphate.

Apart from some terrific recipes, Any One Can Bake, also includes lots of advice on the art of being the perfect hostess. In ‘Table Appointments and Table Services’, the lady of the house is encouraged to take pleasure in pretty, spotlessly clean linen; shining silver, glass and china. Advice is very specific, for example:

A  refectory table with deep ecru hem-stitched linen runner and mats, brass candlesticks, Italian or Spanish pottery dishes, and tinted glass tumblers, with fruit as the center-piece is an attractive and well-appointed supper table. (Any One Can Bake, 1929, p.5)

Nowadays, we have Pinterest mood boards to provide us with inspiration for our table settings.

Other sections include, bizarrely, ‘How to open any Royal Baking Powder tin’ and more usefully: table of measures and equivalents; temperatures for deep fat frying, baking and making sugar syrups. There is also a really interesting chapter about the ‘Evolution of Baking Powder’. Below are a few of my favourite quotes from that particular chapter:

There are also some really nice meal plans and menus for special occasions. The ‘Evening Suppers’ aimed at the American teenage tradition of ‘boy, girl’ parties, is rather sweet:

Every young girl is anxious to give a party that is different and to be assured that her boy and girl friends are going to have as fine a time at her home as at any other. The kinds of cake or sandwiches or other dishes that the boys like will always be the ones decided upon. The selections below are apt to be most popular with them.

Many of the dishes suggested can be prepared on the electric grill, and their preparation on the table with the help of the guests contributes to the success of the party.

At the back of Any One Can Bake, there is a fun section, very much of the era, ‘Hints For Young Housewives’. Although, so much of the advice given, is still just as relevant today. Here are a few of my favourite nuggets of wisdom: 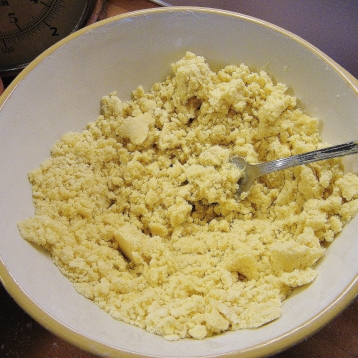 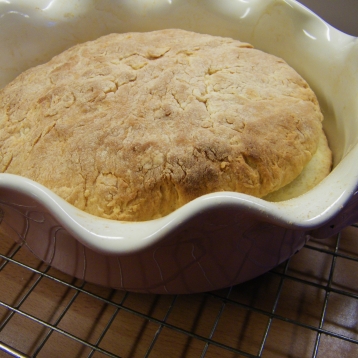 There are so many tempting recipes in Any One Can Bake, I just couldn’t decide which to try first. However, I had some fresh strawberries so opted for ‘Old Fashioned Strawberry Shortcake’. I have never made strawberry shortcake before but know it to be a traditionally American sweet bake so it seemed fitting to give it a go for this post.

The final result was excellent, although one family member said that they found it to be a bit heavy. If you like the dense texture of scones, then you will love this recipe. You can use any fruit that you like to decorate. I used strawberries and blueberries. If you made this in the Autumn/Winter, why not use blackcurrants, red currants and blackberries.

**you don’t need as much water as this recipe suggests. Only add a tablespoonful and see how well the dough comes together after that. If you accidentally add too much water then add a little bit of extra flour. I used unsalted butter in my recipe which is perhaps why I didn’t need much water but if you use shortening (UK=Trex, America=Crisco) then you may need this volume of liquid to bind the dough. Make sure that you add both eggs though otherwise mixture will not bind. 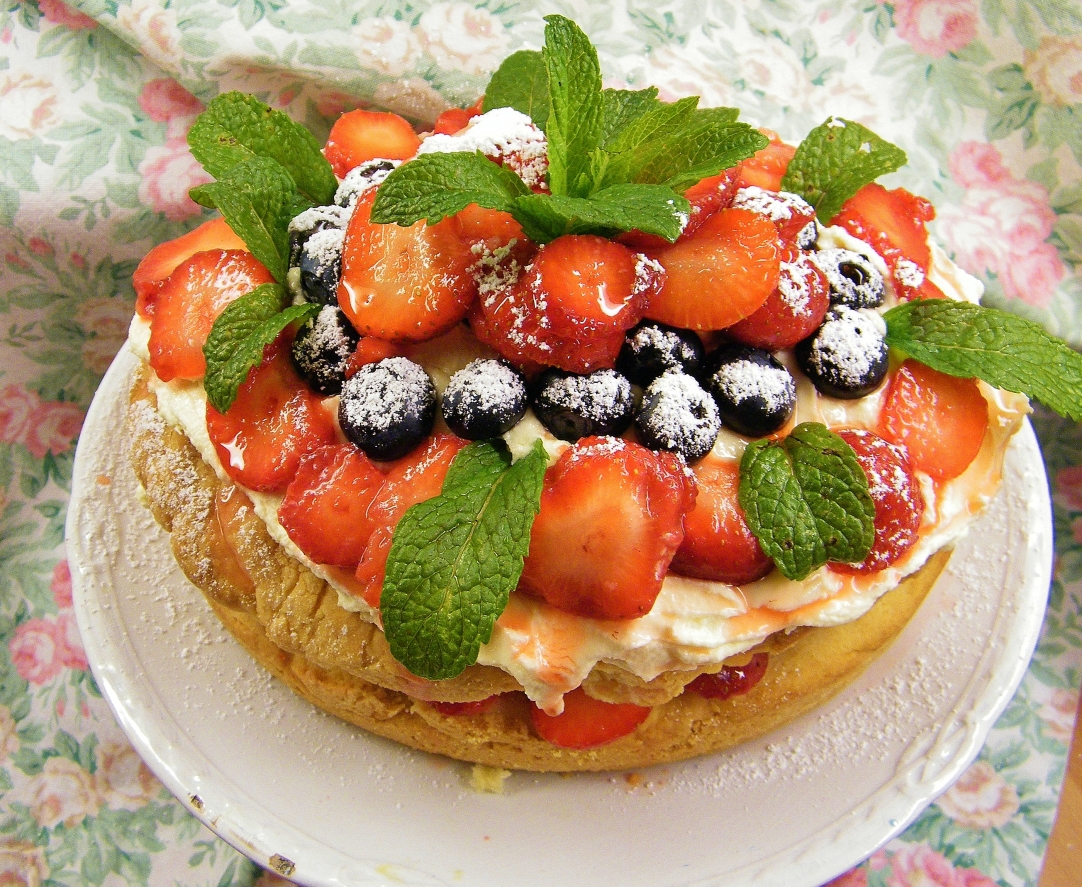